The KiteGen stem, the result of years of research and testing, now covered by 40 international patents, is based on the physical principle used by the dynamo to produce clean energy by means of a highly sophisticated, dynamic and light technology.

• Exploitation of an unlimited, constant and almost universally available source of energy

• The installation of the machine does not require any special infrastructure

• Scalability: the farms are designed according to the local power generation needs 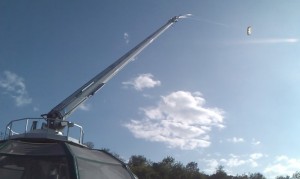 An automatically driven wing, designed and implemented in our company, flies between 600 and 2000 meters to harvest the mechanical energy of powerful winds, which is then transmitted to the ground, converted into electric power and finally injected into the grid. Two high-strength ropes realized in composite materials connect the wing to the base and transmit the traction of the wing thus activating the power generators located on the ground and producing energy. When the ropes are fully unwound and the maximum height is reached, the wind is driven to a position where it loses wind resistance. At this point, it is wound up and brought back to the minimum height. Then the cycle restarts repeatedly, just like a yo-yo. All the heavy machinery for power generation and the management of the entire system is on the ground, consisting of an igloo-shaped base and a 20 meters long stem, connected to the wing through the ropes. The base hosts the hearth of the machine: the software, which controls all the operations on the bases of the data received from on-board avionic sensors. In this way the wing flight paths can be controlled and directed to maximize the energy production, in compliance with the working principles of the machine and in conditions of complete safety. The production cycle is divided into two distinct phases: 1. Production phase: the kite gains height and unwinds the ropes, thus causing the rotation of the drums and generating electricity. 2. Passive phase: when ropes are entirely unwound, the wing is driven to a position where it loses its wind resistance and the cables are wound in. Then the cycle restarts. Energy consumption during the winding phase is a minor fraction of the energy generated during the unwinding phase.